After the bombshell years of Punk in the late 1970’s the British make was ready for something different. The leather jacket, blue jeans with safety pins and generally unkempt grubbiness was becoming very annoying. What he wasn’t expecting was the idea that he should start to dress like a make up wearing Pirate. The new romantic period of the early eighties gave rise to a strange period in mens fashion that has not established itself as much as the pioneers who did it might have wanted. 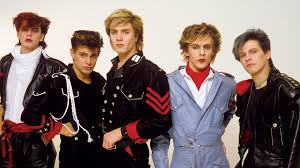 Duran Duran, Visage, Spandau Ballet, ABC, Culture Club, Adam and the Ants, these were the purveyors of the New romantics. These were guys that had spent their teenage and pre teen years being blown away by David Bowie’s Ziggy Stardust creation, Marc Bolan’s corkscrew hair and Mick Jagger’s sudden androgenous approach. They might not have taken on the rock elements they had, opting for a softer perfect pop approach but after punk’s raw aggressive edge this was a new alternative.

As with many other movements it was played out over a deep recession, the Falklands conflict and increasing tensions with the USSR to the point of near breaking in 1984. As the decade progressed the old staples of Jeans and T-Shirts began to come back and assert itself. You ‘ll not see any new romantic styles at any more but Mens Designer Clothes are certainly more inclined to favour colour and embellishment than they used to.