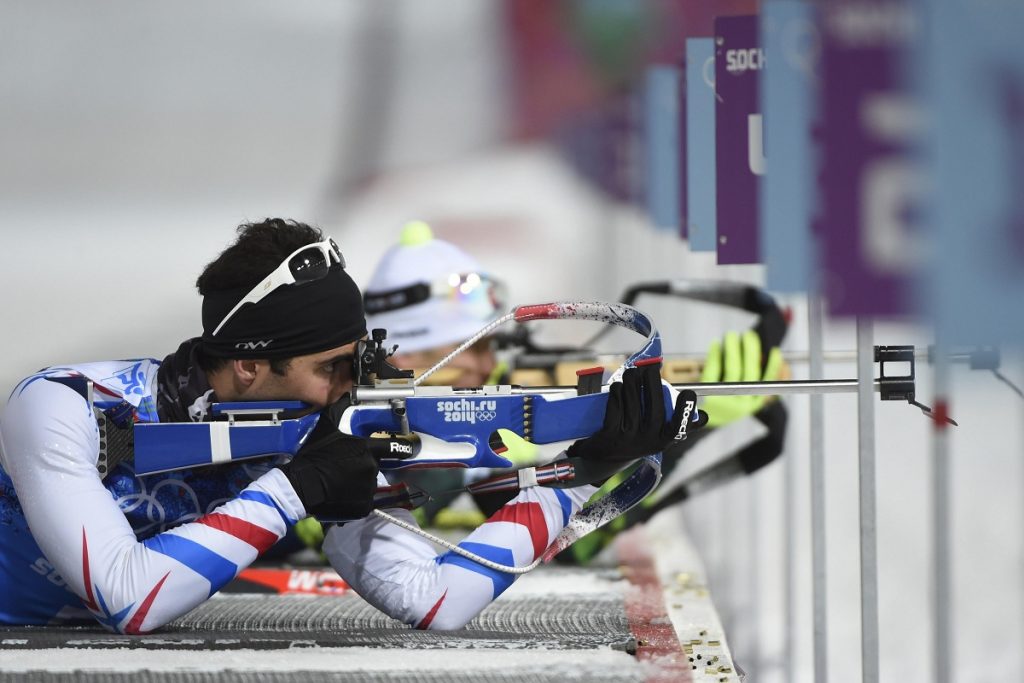 Weapons for children are not a toy. Should I give the child a bullet shooting? And is there a place for girls in the men’s sport? How to bring up a shooter and a balanced athlete? We’ll figure out.

This sport grew out of archery and was developed in the 14th century with the invention of a smooth-bore gun, which later changed to rifled pistols. In European countries, from the middle of the 15th century, they begin to hold firearm shooting tournaments. In Switzerland, the first bullet shooting events were organized in 1452.

In France, in 1449 one of the first communities of shooters was formed. In Russia, bullet-shooting begins in Khabarovsk in 1898 at a shooting tournament, which then grew into annual shooting events. Bullet shooting entered the Olympiad quite early, in 1896, and a year later the world championship appeared, which is still being held.

There are three types of rifles: pneumatic with a diameter of 4.5 mm, small-caliber – 5.6 mm and large-caliber – from 6.5 mm. At the Olympics are presented exercises in shooting only from a small-caliber and air rifle at two distances: 50 and 10 m, men/women shoot from three positions with a small-caliber rifle, 10 meters from an air rifle. And there is also a mixed type of 10 meters among men and women.

Athletes shoot from three positions: lying down, with a knee or standing. In the first case, the shooter lies on the ground on the elbows, the weapon in his hands and the right shoulder are supporting, if the athlete is right-handed. The forearms do not touch the ground. In the second case, the athlete shoots from the knee, the left elbow rests on the knee from the same side and does not lean forward, the maximum is 100 mm. From the third position, the athlete holds a rifle in his hands, with support on the right shoulder and the thoracic region on the right.

Pistols are divided into the following types: pneumatic with a diameter of 4.5 mm, small-caliber – 5.6 mm and large-caliber (revolvers) – from 7.62 to 9.65 mm. Athletes shoot only standing on their outstretched hands. The distance from which the shots are carried out begins with 10 m and can reach 50 m.

Shooting at a moving target 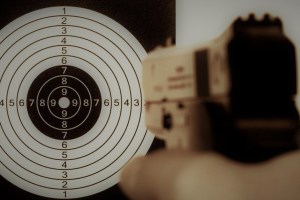 This type of shooting is done at a distance of 50 m and 10 m. The athlete shoots a small-bore rifle into a “running boar” from a distance of 50 m, the rifle changes from 10 m to a pneumatic one, and the target is double: right and left, with a sighting black apple in the middle. Targets are moved from one side to another and vice versa. During the movement of the target passes the so-called “window” for 5 s or 2.5 s. The athlete performs a shot at the time of passage of the window.

Targets for this sport are made of paper of white or cream color. At the trial stage, the target should have a black line in the upper right corner. Recently, at international competitions, electronic targets have been used that more accurately transmit bullet hits to a target.

In sports schools, children are recruited from the age of 10-12 only. Previously, the child is not prepared physically and psychologically to work with the weapon. However, in private centers, at the discretion of the coach, children of 8–9 years old are accepted, in the case of a good physical condition or “tallness” of the child. But about children of this age should not be allowed to train.

Bullet shooting attracts boys first of all, and pistol shooting is preferred. Girls are not small in this sport, but they are more interested in rifle shooting. In the boy’s section they take more readily, and usually, they are stronger than girls, which allows them to start practicing earlier.

The initial stage of training lasts 2 years. Children are accepted from 10 years and older who have passed the basic and special standards. Young athletes should not have contraindications in terms of health.

The first training stage of 12-14 years

At this level, a teenager is engaged in four years. Children over 12 years old are accepted, with a discharge not lower than the third. Athletes who have passed the necessary standards for basic training are allowed to train.

Candidates for the master of sports pass to the second level of training. He directed the improvement of sportsmanship. Athletes are accepted, confirming the required indicators for basic and special training.

Shooting has no special contraindications in terms of health, except for acute and chronic diseases with exacerbation, neuropsychiatric diseases, and complicated myopia.

Sport and youth schools, where bullet shooting is mainly taught, suffer from a lack of necessary equipment and equipment. Rifles and pistols are rarely updated, due to poor funding for children and youth schools. Parents have to spend money on acquiring new weapons for their child’s professional career, or help schools financially. On average, one air rifle costs $2800.

In addition to the fact that sport is expensive, it is also unpopular with young people and children. Parents prefer team sports such as hockey, football. Or choose sports where the child works on his body to a greater extent. The results of training in shooting do not come immediately. Sport is long-term, and therefore not everyone is ready to devote his whole life to him. Athletes begin to win the first competition in 20-25 years, which scares the parents who are eager to win.

How much are classes

For a lesson with an instructor in the absence of your weapon, you will have to pay about $25.if we consider the private TIR. With your inventory training will cost $20. In the regions, the cost per hour is less -$15. CYSS takes teenagers to shoot classes, in case the school has the necessary support.

How to choose a section

The start of sports and acquaintance with a child’s safety shooting technique can be safely passed in a regular sports school. After it is better to find a mentor for your child. And when choosing a school or a private center, you need to focus on it. School fame does not guarantee results. You must find your coach, who will believe in your child, will teach technology and instill a love of shooting.

Teenager engaged in shooting, calm, focused. The young athlete learns to constantly control his emotions and pre-competitive excitement. The shooter has the willpower, patience and knows how to consistently go to the goal. There is no ardent rivalry in shooting; the athlete does not go one on one with the others. He performs all alone and must gather strength, focus on shooting and show the result.

What difficulties can you encounter

Bullet shooting does not receive adequate support from the federal budget and suffers from a poor material base. Expensive equipment, expensive sportswear for performances, for example, a uniform costs about $2200, affects the popularity of sports in the country. Parents are required to spend a lot on classes and on modern weapons in order to ensure a child’s sports career.

Bullet shooting teaches the child concentration, self-confidence and the ability to tune in to each shot. He understands how to treat weapons and does not perceive him as a toy. The child is aware of the responsibility for the result and that he cannot rely on other team members. If a parent wants to raise a balanced athlete, a person who is able to fight and constantly learn, then gunfire is ideal.