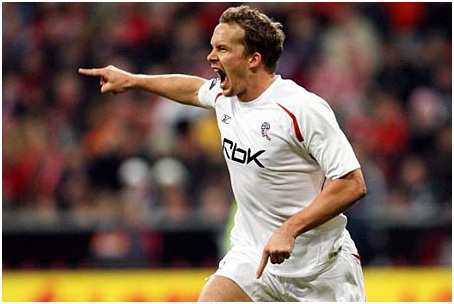 Inspired by the recent entertaining list of FA Cup cult heroes from Betway, in line with the earlier ties during the illustrious knockout competition this year, plenty of reminiscing has since occurred as we look at further fan favourites from clubs and national sides.

This time around it’s the turn of modern day players and, specifically, a true Bolton Wanderers cult hero in the likeable form of recently retired centre forward Kevin Davies.

The current crop of Bolton players may be enduring a tough time at the depths of the Championship table, a true fall from grace for this once high-flying top tier outfit, but just under a decade ago their former star striker Davies was helping upset the odds in both Europe and cup competitions.

Bolton’s retired hero was once on target against European and Bundesliga giants Bayern Munich, dispatching in a courageous 2-2 UEFA Cup draw in Germany to further cement his legacy as a true fan favourite within the Greater Manchester club.

“We had some good times and made a lot of history with some great players – it’s a long way to get back there,” Davies recently admitted, and he’s right, with the previously feared frontman having been involved in some truly memorable occasions throughout a successful decade’s worth of Trotters service.

Before becoming a Bolton legend, Davies was part of the famous Chesterfield side that shocked English football by reaching the FA Cup semi-finals in 1997, and also added to his cult hero status at international level by earning a single England cap against Montenegro, during a scoreless draw in October 2010.

Davies’ long-standing contributions to Wanderers are made all the more impressive considering he was snapped up in 2003 on a free transfer, after he was released by Southampton, ultimately taking the club captaincy later in 2009 when Kevin Nolan switched to Newcastle United.

Immediately after joining on a Bosman, Davies captured the hearts of the Bolton faithful, rediscovering his rampant form in front of goal, netting 10 times and starting every league game. He was eventually rewarded for his battling efforts as he picked up the club’s Player of the Year award, after also dispatching in the League Cup final defeat to Middlesbrough.

Being a hefty centre forward, Davies was always throwing his weight around and aiming to cause opposition defences as much trouble as possible, with his aggressive approach adding to his acquired admiration from fans.

This element of Davies’ game saw him make the most fouls in the Premier League for three successive seasons between 2004 and 2007, but in the following two campaigns he was more behaved, committing the second most.

In fact, throughout the history of the Premier League, no player has committed more fouls than Bolton’s former stalwart skipper, with incredibly over 1000 offences to his name.

In 2009, Davies was accused of deliberately trying to injure Arsenal’s Gael Clichy, in which he replied: “A few of them let out a big scream, which is a bit embarrassing because it is a man’s game, in my eyes that is cheating the referee, you just have to get on with the game!”His status as a cult hero was truly written into the history books in 2011 when Davies was shown his 100th Premier League yellow card, following a challenge on Manchester United’s Patrice Evra. The former forward once held the record of most cautions until Everton midfielder Gareth Barry recently surpassed it.

His status as a cult hero was truly written into the history books in 2011 when Davies was shown his 100th Premier League yellow card, following a challenge on Manchester United’s Patrice Evra. The former forward once held the record of most cautions until Everton midfielder Gareth Barry recently surpassed it.

The records didn’t stop there though, as Davies set a Premier League first for the most fouls in a season during 2009/10 proceedings, committing a mammoth 120 offences. Further boosting his non-gentlemanly on-pitch reputation, in the 2010/11 term he went on to break his own record with 121 fouls. No too shabby.

As well as his aforementioned UEFA Cup heroics against Bayern, Davies was also instrumental in helping the club retain their top-flight status in 2008, returning after suffering a broken hand to keep the Manchester-based side afloat.

In total, across 10 gallant seasons at Bolton, Davies made an impressive 407 appearances and dispatched 85 goals on all fronts, with his all-round attacking and aggressive attributes making him a genuine cult hero within the club.